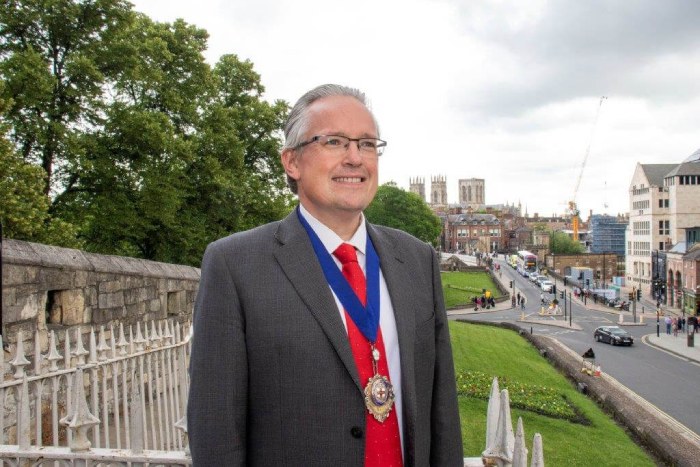 At the time of writing, my two year term as President of the York & North Yorkshire Chamber of Commerce has just come to an end, and what an “interesting” period (in the sense of the Chinese proverb perhaps) it has been for the business community. I don’t think any of us had any idea, when I took up the role in July 2019, what was heading for us 7 or 8 months later as Covid swept around the world and words and phrases like “furlough”, “lockdown” and “social distancing” became common currency.

The first few months of my Presidency were “business as usual” for the Chamber, and I enjoyed hosting events with Members, including hearing presentations from the local MPs in York (both inner and outer), Malton and Scarborough, as well as from Professor Charlie Jeffery, the Vice Chancellor of the University of York, who has some great ideas and enthusiasm for York’s potential to create an “innovation infrastructure” to nurture high-productivity tech-driven businesses in the city. I also had the pleasure of hosting a Christmas lunch in December 2019 where we heard from Yorkshire jukebox entrepreneur Chris Black of Sound Leisure about designing and selling high-end traditional jukeboxes made in Yorkshire to customers all over the world.

One of the great pleasures of those events - not reserved to the Chamber President of course - is the opportunity that they present to meet and speak to business leaders from all sorts of different sectors and to hear about what makes their businesses tick, what challenges they face, and what future plans they are developing. Part of what has always driven my involvement in the Chamber since coming to York in 2004 when I joined Rollits has been a firm belief in the value of developing relationships with people in the local business community, and I often tell our junior lawyers that it’s wrong to approach networking and events with a mindset that you must come away with an instruction for a piece of work. It’s all about getting to know - and be known by - the business community as somebody they trust and can speak to.

In early 2020 of course, and almost immediately after our Chamber event with Professor Charlie Jeffery, the national Lockdown was upon us, and at that point the focus of my role as Chamber President and the balance of what I could do to add value and represent members shifted dramatically from events and towards the more political and representation aspect of the role - which is always a part of it but which now, more than ever, would be important for the Chamber and for its members.

For the past 16-18 months, therefore, I’ve been involved in a whole range of committees, meetings, consultations and round tables arranged not just by the Chamber itself, but by local government and the Local Enterprise Partnership aimed at helping to communicate the needs of business throughout the crisis, and reflecting back to Members through the Chamber’s communications where some of the support options available to businesses could be accessed. Our regular York & North Yorkshire Chamber Leadership Group meetings were an invaluable tool for “taking the temperature” of some of the region’s most significant businesses as they strove to adapt to the changing business environment, and I think (or hope) that a lot of the members of that group benefitted from being able to share their experiences with the Chamber and with each other and to know that no business was alone in going through a range of testing circumstances and having to adapt quickly and in some cases to find themselves stronger for doing so.

Perhaps one of the most rewarding aspects of this - and one of the most positive things to have come out of the pandemic and the business and local government response to it - has been the greater sense of partnership working that it has fostered across our region, bringing together not only local policy-makers but also a range of business representative groups - The Chamber, the IoD, the FSB, the York BID etc - and a recognition that we can perhaps achieve more by working collaboratively in this way than by viewing each other as competition for members and working in individual “silos.” I suspect most of us know this to be true in our own business lives in any event, but it was great to see it in practice during this difficult period.

I was also able to get involved in some key issues affecting our region, including on the question of the Local Government Reorganisation that was required by central government as a pre-requisite to moving forward towards a regional devolution deal for York and North Yorkshire. The Chamber, after consulting with its members through the Leadership Group, chose to support the proposal being advanced by North Yorkshire County Council and City of York Council to create two Unitary Authorities which - we hope - will then be able to form a Combined Authority led by a “metro mayor” similar to the model adopted in West Yorkshire, which will unlock potentially game-changing funding streams for the region and an ability to direct and apply that funding in a way which is best suited to our region’s needs in order to promote prosperity and “good growth.”

As at the date of writing this article, we have just been informed that the Secretary of State Robert Jenrick MP has decided to support this model of local government reform for the region, and it was gratifying that his department’s formal letter specifically referred to the role of the York and North Yorkshire Chamber (amongst others) in presenting the case from a business perspective.

I am grateful for the support that Rollits has given to me during my Presidency, an understanding of the time commitment sometimes required and of the value to the firm of having a Partner occupying a role such as this within the business community. I’m also thankful for the massive support of those working within the Chamber during my Presidency including Susie Cawood and Ian Williams (both of whom have since stepped down from their roles and are I hope enjoying spending their time in other ways), as well as the Chamber CEO Sandy Needham, Head of Policy Mark Goldstone (whose political antennae are superbly well tuned!), Michele Taylor and of course my Vice President - and now President of the Chamber - Laurence Beardmore of York Emporium, whose background in both huge global corporations and building his own startup from scratch to sale will give him tremendous insights and bring huge value to the role - I wish him all the very best.

I will of course be continuing to be involved in the Chamber as a Board Director for a couple more years, and in the interim supporting Laurence in the handover period, and I think we’re all looking forward to getting back to face-to-face networking events and being able to share experiences and reflections in person with our peers in the business community. I look forward to seeing many of you in that way soon.

Before Christmas we published an article regarding a recent menopause event hosted by Rollits and the guidance published by the NHS regarding menopause in the workplace. Today the Government has...
Read more
blog

The Claims Process – An Overview

Over the next few months we will be producing a series of 16 articles as a step by step guide through the claims process, providing insight into each stage of...
Read more
Read all news and events